I recently had a rude awakening when I opted to reinstall Windows on my aging desktop PC. I, of course, backed up (what I thought was all the data) using Norton 360 (I was strong-armed into purchasing by my Internet provider, Xfinity). Unfortunately I used the default settings for my backup since Norton indicated all my folders and files would be backed up. So I reformatted my hard drive and reinstalled Windows 10 and then I restored my files from my external hard drive using Norton 360. So far so good.

When I went to check on the websites I have created however, I found out that the default settings for “files and folders” did not include my CSS (cascading style sheet files). This was a total disaster. My HTML index files were backed up and restored but none of my critical style sheets were there. I was astounded. I couldn’t believe it. I learned a very painful lesson. If you don’t want to lose something, you had better save it several times in different places with different formats.

I had no idea Norton would discount the importance of CSS files and ignore them. I have since added “.css” as one of the extensions I want Norton to backup but it will take months to recreate the missing CSS files. I have already deleted about 30% of my websites because it could take years to figure out what the style sheets should include.

I was able to resurrect the sites I have previously published on the web since they are stored on my web hosting service and I just downloaded them back onto my PC. But the feeling I have about this mistake is like betrayal and I have no plans to renew my Norton subscription. Along the way I learned another valuable lesson. You should unplug your external hard drive after making your backup avoiding any possibility of a hacker attacking your backup as well as your PC.

I have noticed recently that my vision is not what it used to be and even with powerful reading glasses I was having problems reading many of the warnings the computer was attempting to tell me. In my struggle to correct this (old age) problem I discover Cortana the Windows equivalent of “Hey Google.” When I asked how to increase the font size on my computer she provided this quick solution and I thought some of you might like to know what I discovered. If you also are having the same problem, you don’t have to throw out the computer or give up computing all together although I did consider both. The fix is simple and I am in awe if you knew this already. First, right click on the screen and you should see this dialog box. 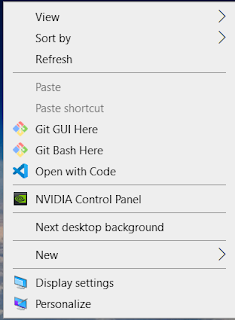 Click on the next to last option “Display Settings.” Another tip accessed from this box is the “View.” If you select this option you can change the size of your desktop icons. After selecting Display Settings a new dialog box will open. 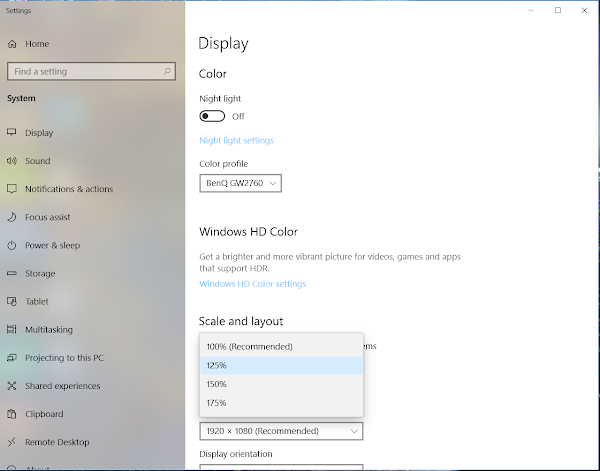 Click on the “Scale and layout” option which will open four options. I changed my scale from 100% to 125% and voila all the text popped up in size.
at February 20, 2022 No comments: