After I graduated from San Francisco State in December 1975, I went back to playing the drums at Spider Murphy’s in Old Sacramento with a band called the Night Owl Express. The first real gig that came along after SF State was a Technical Writing job in San Ramon for a company called Multisonics in 1976 and that’s where I first met Bruce Odelberg. Bruce and I struck up a friendship and he suggested I move into the old 19th-century house in Sunol with him to share the rent. There were four of us living there at that time, Bruce, myself, John Meyers and John Sutherland. The house was very large, great for parties and we each had our own rooms.

Sutherland was a friendly guy and we hit it off right away. John was very likable and a fun-loving laid back individual. We were all the same age, and John worked nights for Yellow Freight while Bruce, John Meyers and I worked in the daytime at Multisonics.  John was especially kind to me making sure I was included in many social activities. He had a great sense of humor and figured out early in life that his ego didn’t matter. Everyone who met him liked John; he was a lot of fun to be around.

Money was pretty tight for me in those days and I remember it was John who loaned me the money to go to Great America on one occasion. He gave me a pair of work boots for a fishing trip we took in the Sierras. The three of us spent a good amount of time camping, fishing and hanging out together.

On one fishing trip to the Klamath River, John brought his bride-to-be, Lynn and the four of us (John, Lynn, Bruce and I) slept in the same tent during our week long trip. We not only fished for steelhead we caught quite a few and Bruce’s mom and dad smoked the fish at our campground.

A few months after they got married, I married my wife Shelley; Bruce was my best man and John was a groomsman in the wedding. We bought a house in Dublin just down the street from John and Lynn and shared many weekend barbecues at the Sutherland home. We had a few margaritas too. Some of the best times in those days were spent with John and Lynn. Once, John decided to use gasoline instead of lighter fluid to start the barbecue; I think he used it to kill weeds in the lawn too. Shelley and Lynn cracked me up when they posed for a picture, each wearing half of the same pair of broken sunglasses.

It wasn’t long before our families grew. First with the birth of their son Ian whom Shelley used to visit as often as she could and then with our son Brian. Our second son Kevin came shortly after Lynn gave birth to the twins, Sadie, and Lucy and by then the Sutherlands had moved to Pleasanton and Shelley and I were living in Livermore. I remember visiting John and Lynn and giving them a box of condoms in case they were having too many babies. We all laughed. John was a good husband, father and a great son. After his mom passed away he would spend time with his dad whose health was failing.

Some of my favorite music came from John. He introduced me to the Story of Jesse James which is a compilation of songs by a variety of artists including Johnny Cash that retells the legend through songs.

Shelley and I moved to Santa Rosa after our daughter Michelle was born and would stop in to visit John and Lynn on our annual holiday sojourns to Livermore. When they moved to Redding, we stayed in contact with Lynn with annual Christmas cards. Our kids grew up, went to college, got married and started families of their own.

So we were greatly surprised and saddened to hear that John passed away on October 5th, 2010 at the age of 62. Be thou at peace. 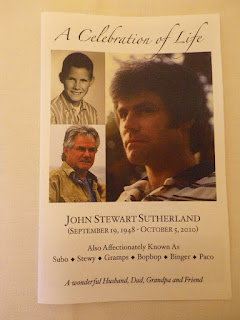