Profanity Prevails ~ the Sound is Deafening

I've seen two of this year's Oscar award-winning films, Inglorious Bastards, and Precious and have to say these are not appropriate movies for youngsters. The first was directed by Quentin Tarantino so I would expect it to include extreme cruelty and horrific violence. What I didn't expect, because so much of the dialog is in a foreign language, is the use of subtitles would be necessary. I don't see all that well so that kind of puts a damper on things, at least for me. Tarantino obviously fantasizes about evil. He has produced several films that are full to the brim. Precious on the other hand, probably out F-bombs any film produced to date. Some of the acting is wow-good but it sure isn't an uplifting story by any stretch of the imagination. I'm thinking maybe I 'm more an Avatar kind of audience. We shall see. I'm also aware the studios seem to mix the DVD sound and soundtrack in a way that my volume is always messed up. Either the background sound is too loud or the dialog impossible to hear. Among the other acclaimed films, this year are Hurt Locker and Invictus and I've heard both are very good. I'm expecting Hurt Locker will have plenty of violence (how could it not?) and probably plenty of profanity too but maybe Invictus will spare me.

I remember the first movie I saw where the F-word was used; it was M*A*S*H, believe it or not, and I was in the Army. I remember a big hubbub about the on-post theater being able to show it because of its focus on suicide and the use of the F-word during the football game. That was probably 30 years ago and look how far the entertainment industry has pushed the boundaries of sensibilities. It isn't confined to just the entertainment business either. It's in publishing, books, magazines, online, you name it. Our society has become more decadent and corrupt as the days pass by. (This has the sound of "The Fall of the Roman Empire" I know.) I began to notice it in the sixties when "the pill" enabled the "sexual revolution." Things like integrity, honesty, honor, values have all taken a backseat and gone downhill. It has permeated Political institutions like Congress, Senate, Governors, Mayors and others who are role models for the rest of us. Especially the kids. It isn't any wonder I'm watching the news broadcast about a 15-year old being arrested for attacking a 57-year-old woman and throwing her onto the rail tracks.

Before you jump to the conclusion that I am a purist, trust me when I tell you I am not. I confess to being a conservative Liberal whatever that means. I support the military but wish we'd get out of the wars. I would have preferred it if cheap handguns and rifles had been banned after we lost a President to a crazed fanatic (my apologies to the NRA). Unfortunately, there are quite a few crazed fanatics all over the world and whether they're influenced by our entertainment industry is doubtful but I sure do admire those societies who have maintained some manners and level of decorum when it comes to the way we treat each other. In a better world, it wouldn't be phony either.

Getting right to the point, I don't think I would take offense so much if it weren't for the fact that I'm trying very hard to "be positive." Some of the films I've seen this year have been upsetting my balancing act between being positive and depression.

I just reconnected with friends from way back in elementary school and what a thrill it was. A longtime heartthrob of mine, we were in the 6th, 7th, and 8th grades together and everybody lusted after her as much as boys with budding hormones are capable. She doesn't remember me (of course), can you believe that? Well, it doesn't really surprise me, she didn't know I existed back then either. We went to school, partied at the teen center, attended dances and spent quite a bit of time together in the same groups but I was not real memorable or remarkable back then. I still think of her fondly as someone who was special in those days. 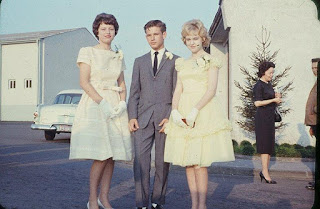 I started smoking cigarettes in the 7th grade: played baseball, was in the Boy Scouts and had friends a plenty. But I was not the most popular guy around and she was the most popular girl. I piled up the demerits and got into some difficulties in the 8th grade, but she doesn't even remember that. Oh well, I feel like Charlie Brown.

Have you ever wondered why it is that things we thought we really wanted but never attained are our elusive butterflies? We continue to hold them in great esteem but only so long as we don't attain or reach them. If we actually experience them, whatever they may be, we find out what it's really like and it never measures up to what we thought it would be.

Just reconnecting is a big deal to me. I finally got another glimpse of one of my elusive butterflies and she is just as out of reach as ever. Some things in life are perfect.