Aufwiedersehen is a wonderful way to say adios or goodbye. So many wonderful memories come flooding back when I read this word.

On 18 March 1945, Zweibruecken (which means two bridges in German) was first occupied by American Troops. Three months later, by the end of June 1945, the French Garrison took over the Kaserne, the German word for fort or base. The four buildings were restored and named Turenne Kaserne. In 1953, the French Garrison was transferred to Niederauerbach Kaserne and in turn, Kreuzberg was restored and enlarged by American troops. After completion of the project, Kreuzberg Kaserne became the Personnel Replacement Center of the U.S. Army Europe and as an Army brat was my home from 1960 through 1964.

When I left in 1964 it was called Turenne Kaserne. I don't recall any notification that the name was changed to Kreuzberg Kaserne and the reason for my confusion. Imagine the name of your hometown being changed while you were away.

Inevitably, all those military installations in occupied Europe would eventually be vacated and lapse into ghost towns. The properties reverted back to German control and many buildings on those sites were demolished and new establishments built. 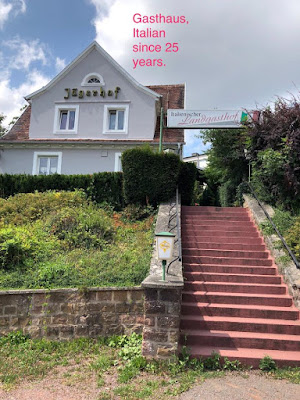 The closest thing to a pub to our housing development was the Jagerhof where many of us had our first pizza and beer. While we were not supposed to drink if we were not 21, not much monitoring was done in those days and for the most part, everything was kept pretty tame. The Jagerhof

Coming of Age in Zweibrucken is a book now available from Amazon and describes my experiences living in Europe during the Cold War.

There is a whole nation of (mostly) guys who spent many an afternoon and evening at the Jaegerhof. They were stationed at Turenne Kaserne (AKA Kreuzberg), either with the Army VII(?) Corps, or the AF's 6901 Spec Comm Group. Between 1961-64, I seem to recall a pizza for about $1-$1.25, and Maria's great canelone for about $1.50. Maria had two nephews, would-be draft dodgers from Italy. Both about 18-19, they expected to be called up to give their all for Italia. As both made good tip money (even from GI's), they hated the idea of leaving lucrative Zweibrucken for the $17/month they'd make in the Italian armed forces.

Hi, I'm writing a book about my father and the men in his company who served in Germany between 1949-1953. I'd like to use the photo of Kreuzburg Kaserne in my book. Do I have your permission?

Permission is not mine to give.

I was stationed at Turenne Kaserne from 1958 through 1960 with the US Army 2D Msl Bn, 40th Arty. I worked in the Motor Pool a little further up the hill. I was barely 18 when I got there so I guess you can say this is the place I grew up. I still have fond memories of my time there. I want on to make a career out of the US Army and I believe my experiences in Zweibrucken game me the motivation to continue as a soldier. Not always smooth sailing but I have no regrets. It was a great 22 years and I miss it.

I retired as a 1SG and am still kicking around at the age of 80 years. I still have fond memories of my days in Zweibrucken...great town.